The pandemic caused by the SARS-CoV-2 virus continues to spread and dominate daily life in 2020. Yet, despite the alarming numbers reported (“X millions of cases!”) it can feel abstract. As humans, we tend to care a lot more about our tribe than about anonymous people. With that in mind, what is the probability someone we care about dies from COVID-19?

First we need to define what caring about means: the average number of meaningful, stable social connections one can make (known as Dumbar’s number) is estimated around $150$. Even in our modern, hyperconnected world, it is hard to argue that it goes beyond $10^3$ individuals. In other words, individually we care about an extremely small fraction ($< 0.00001\%$) of humanity. A straightforward estimate of the probability $P$ of at least one of those contacts dying is given by:

where $K$ is the number of people we know, $R$ is the fraction of the population infected, and CFR is the Case Fatality Rate of the disease. Estimating both $R$ and CFR is currently extremely challenging: $R$ suffers from undersampling bias due to lack of testing, while $CFR$ in addition depends heavily on factors such as age, hospital infrastructure, and comorbidities. See [1] for a comprehensive discussion. Nevertheless, using $CFR=1.38\%$ [2], we find: 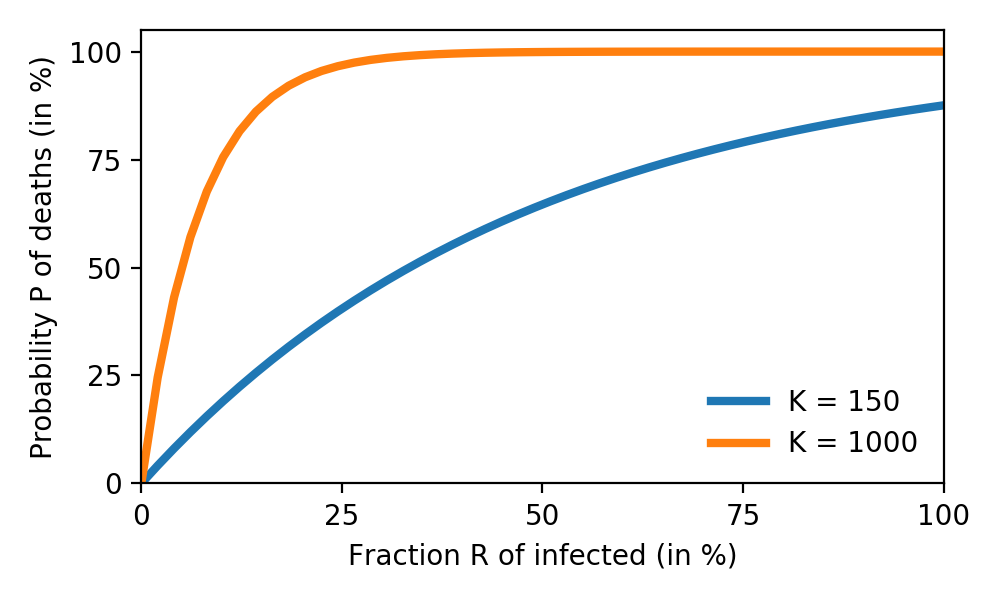 Fig. 1: Probability $P$ of death of someone known from COVID-19, as function of the fraction of infected population $R$ and number of known people $K$.

We see that, as the disease spreads, eventually someone we know is likely to die from it. Knowing more people makes it happen sooner. With the estimated $CFR=1.38\%$, for $K=150$ the threshold where $P \geq 50\%$ (more likely to have a death than not) happens around $33\%$ infected. For $K=1000$ it is at $5\%$ infected. This can help explain some of the skepticism around COVID-19: as of writing, no country has reported infection rates close to those numbers (which would be catastrophic), and thus most people are simply not directly affected by a COVID-19 death.

There is a considerable dependence of Fig. 1 on the estimated $CFR$, however. If we calculate the necessary fraction of infection $R$ to make a death equally likely ($P=0.5$), we obtain: 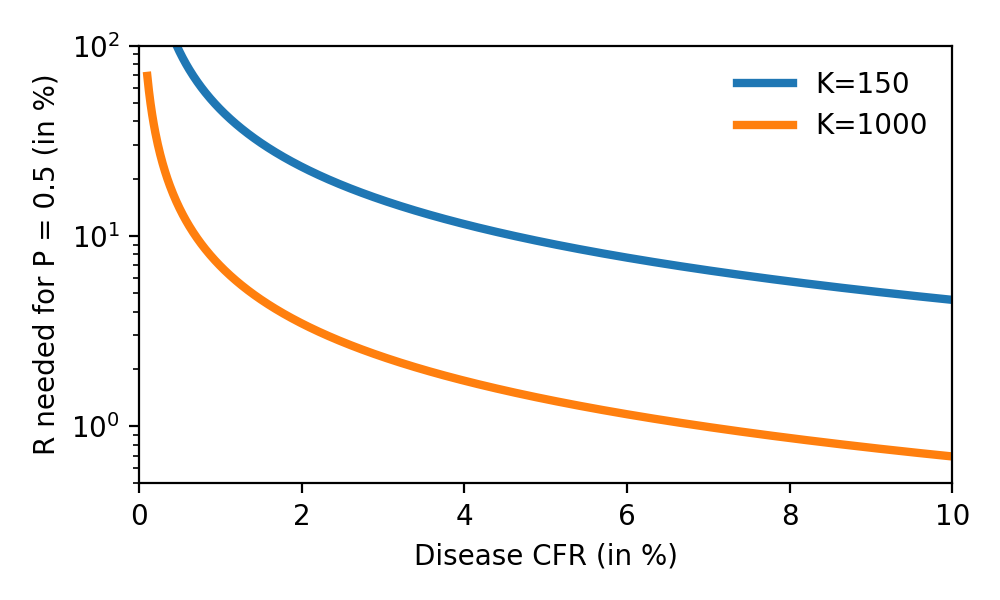 We find that, for larger estimates of the CFR still in a reasonable range, highly connected people ($K=1000$) are likely to start observing deaths with a fraction of infection under $1\%$. Most people ($K=150$), however, still would not observe deaths until infection reaches $\approx 10\%$.

We can improve the analysis a bit. As mentioned, the CFR depends heavily on age, with much higher fatality rates among the elderly. While there are large uncertainties and likely systematic biases in estimating the CFR, values obtained from different countries all follow the same trend [1].

A better estimate for the probability of death then takes into account both the age dependency of the CFR, and the age distribution (also known as population pyramid) of a given society. We assume that cases are spread homogeneously in the population, and that the age of the people we know follows the age distribution of the general population. With this, our expression for $P$ becomes:

where $CFR_i$ and $f_i$ are respectively the CFR and fraction of the population in age group $i$. We here use the CFR estimated from the initial outbreak in China:

Table 1: dependency of the $CFR$ on age during the outbreak in China. Taken from [3].

Lets consider the US, Brazil and Italy, all COVID-19 hotspots with considerably different population pyramids: 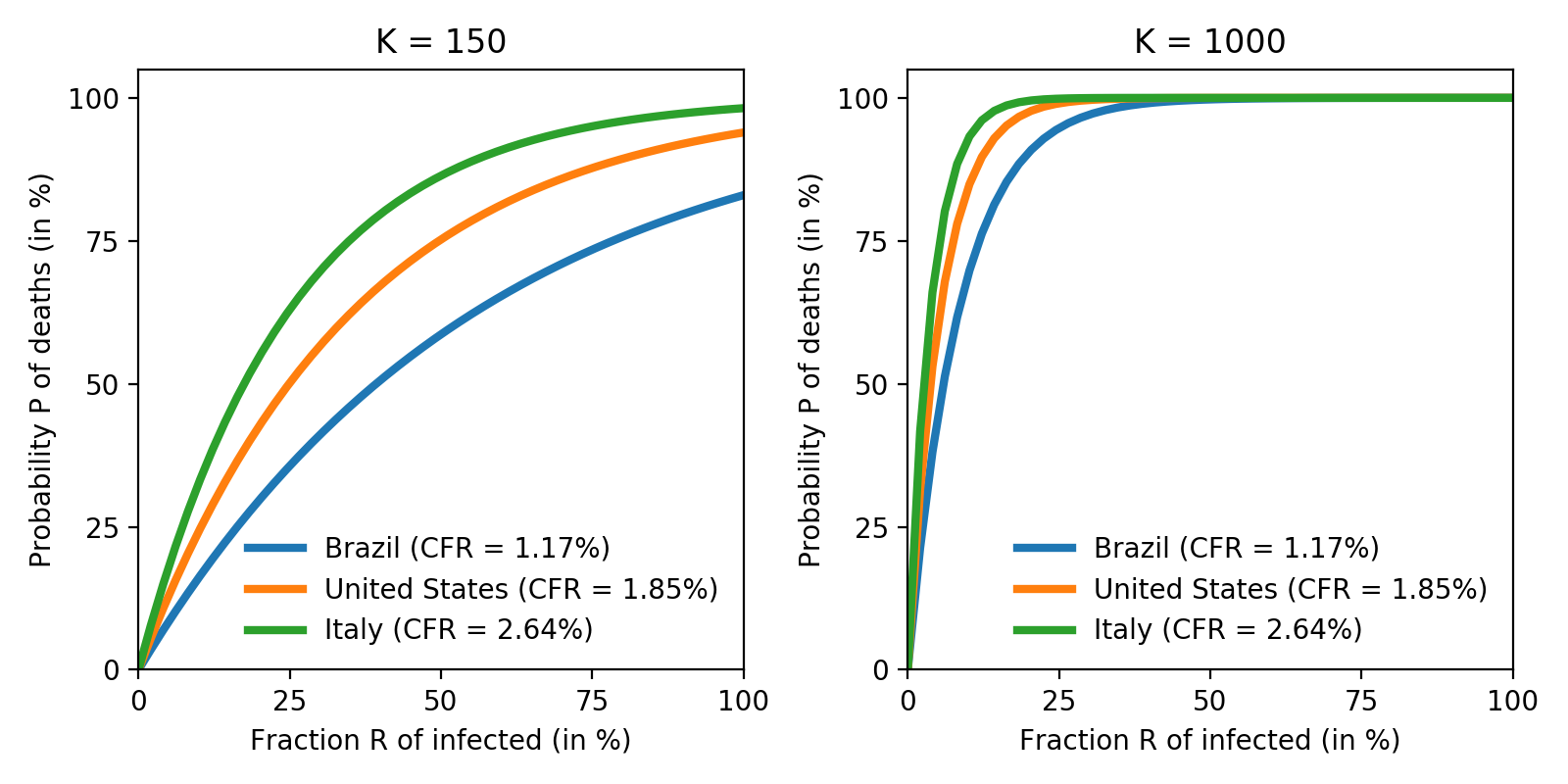 We find that the pandemic hits home considerably earlier in Italy than it does in the US and Brazil. For the average person ($K=150$), the point were $P=0.5$ happens at around $17\%$ infected in Italy, but only around $40\%$ infected in Brazil.

In effect, COVID-19 mortality is dominated by the older population: while people aged 70+ are $17.1\%$ of the Italian population, they are only $10.9\%$ and $5.9\%$ of the population in the US and Brazil, respectively. This more than doubles the total CFR in Italy ($2.64\%$) compared to Brazil ($1.17\%$). The fact that the vast majority of deaths is among the older population is observed in other countries. See [5] for up-to-date figures on mortality in Germany, and [6] for data on CFR around the world.

In conclusion, this simple analysis shows somewhat of a tragic side of the COVID-19 phenomena: in order to take it seriously, many people need to be personally affected by the pandemic. Yet, due to the very small (relative) size of our social networks, this is unlikely to happen until it is far too late.

You May Also Enjoy

2AM, somewhere over the Atlantic Ocean

I’m one of the very few not sleeping in the airplane, hopefully including the pilots. I have a window seat, and the opportunity to write under a sky full of stars over the Atlantic Ocean seemed too precious not to take. Here I am, higher than the Everest and 4x faster than an ICE train. If the airplane went a little faster there would be a bang and I would be faster than the speed of sound. If it went up a little I would confirm that, indeed, the Earth is round. A little more and the number of stars in the moonlit sky would explode. Going further, I’d be able to look down and conclude that our planet really is a pale blue dot. Maybe I will in the future, if space tourism happens in my lifetime. Read more